Dedicated To The Families We Serve

A Tradition of Service

Segal Funeral Home was established in May of 1986 as Beth David Chapel. Charles D. Segal, then 23 years old, owned and operated Beth David Chapel. In a very short period of time, he knew he had found a home. The community embraced his concept of personalized service and accountability.

As was the trend in the early 90's, he sold the funeral home and Beth David Chapel became a part of a group of funeral homes owned by a corporation. After a brief sabbatical, Charles returned to Beth David and served as manager where he continued to serve "his" families for the next seven years. "There were challenges trying to fit our specialized service into the corporate structure," stated Segal.

Having always regretted selling his funeral home, he was grateful when in 2004 the opportunity came to buy his company back. On October 29, 2004, nearly 10 years to the day of his selling Beth David Chapel, the acquisition was finalized. Beth David Chapel was once again family owned and operated by Charles Segal.

Monuments for any cemetery are available through Segal Funeral Home - Beth David Chapel.

Please call our monument specialist Brea Young at 1-813-874-3330 or email her at brea@segalfuneralhome.com for an appointment to discuss your personal needs. 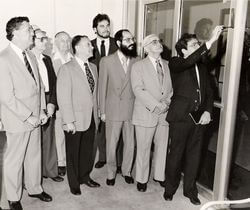