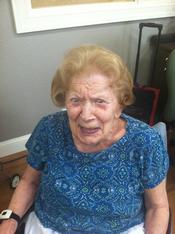 Barbara "Bobbe" Eisen, 91, has died peacefully of natural causes at Haven Hospice in Gainesville, Florida, on March 17, 2013. Barbara Schnapp Eisen was born June 5, 1921 in Brooklyn, New York, to Tess and Anton Schnapp. Her family moved to Croton-on-Hudson in Westchester County when she was a young teenager. A graduate of Hendrick Hudson High School and Cornell University (BA, 1941), she worked as a teacher and a secretary before marrying returning Air Force Captain Eugene Leo Eisen in 1946. They settled in Ossining, New York, where Gene opened Gene Eisen Footwear, and had two daughters. The family moved to Tampa in 1956, where Gene served as President of Congregation Rodeph Sholom and Bobbe was active in the Sisterhood. She also volunteered regularly at the Jewish Towers. Bobbe and Gene were together for 40 wonderful years, enjoying an active social life, golf, travel, and most of all each other's company, until Gene's death in 1987. Bobbe moved to Gainesville several years later to be near her granddaughters. She was a loving, devoted, and much-loved wife, mother, and mother-in-law, and an adoring and beloved grandmother. She leaves behind her daughters Joni Eisen (Chuck Bennett) of San Francisco, Susan Eisen (Rob Ramirez) of Hawthorne, grandchildren Reed Bennett-Eisen (Ilana Friedkin), Lily Ramirez and Carly Ramirez, great-grandchildren Aaron and Ariana Bennett, sister and brother-in-law, Zoe and Morton Gould, nieces and nephews in Florida, New York and Texas dear friends and caregivers Frances McGinnis, her daughter Stacey Cason, and Stacy's daughter Akari.. An avid reader, crossword-puzzler and bridge player, Bobbe was intensely loyal to her many friends, conscientiously keeping in touch with everyone until her health declined in recent years. She will be sadly missed. In lieu of flowers, donations may be made to Hadassah. Graveside services will be held on Wednesday, March 20th at 2:00pm at Myrtle Hill Cemetery.