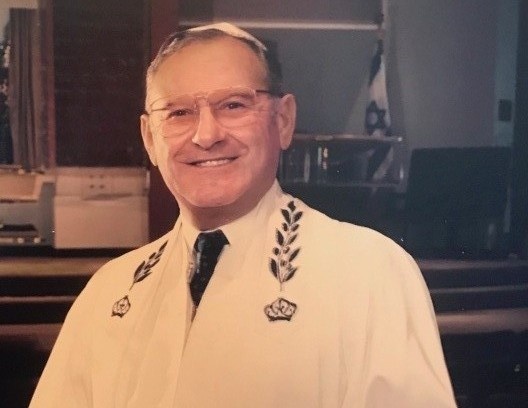 HAUBEN, Cantor William, age 95 of Tampa passed away Saturday, January 20, 2018 at his home. Cantor Hauben was born in Cracow, Poland and was a survivor of the Holocaust. He emigrated to the U.S. and achieved his cantorial degree from the Chicago Institute of Jewish Studies. He was Cantor at Congregation Beth Am in Los Angeles, California from 1958 until 1969 before serving Congregation Rodeph Sholom in Tampa for over 20 years. During his time at Rodeph Sholom he was instrumental in bringing renowned Jewish performers to the community for the annual Jewish Music festival, and prepared hundreds of students for their B'nai Mitzvot. He  recieved the Honorary Fellow (1985) recognition and Doctor of Music Honoris Causa (2006) from the Cantors Institute of the Jewish Theological Seminary of America. Cantor Hauben authored two books, From the Flames: Miracles and Wonders of Survival, recounting his experiences in the concentration camps during the Shoah. In his second book, Light: Courage and Hope,  where he honored individuals from ten countries who protected their fellow Jewish citizens from the Nazi regime. He was preceded in death by his beloved wife of 37 years, Brina Hauben, and survived by his devoted son, Sheldon Hauben of Miami. Funeral services will be held Monday, 1:00 PM at Congregation Rodeph Sholom, 2713 Bayshore Boulevard, Tampa. Interment will follow at the Old Rodeph Sholom Cemetery, 3612 N. Ola Avenue, Tampa. In lieu of flowers memorial contributions may be made to the Florida Holocaust Museum, St. Petersburg, or to U.S.F to benefit Holocaust studies.