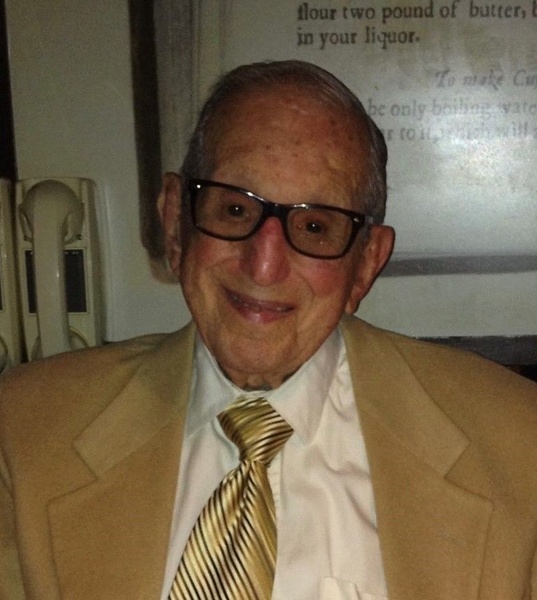 Cyril “Scottie” Silver passed away as he desired - at home just three months after celebrating his 100th birthday.  He is preceded in death by his beloved wife Roberta, his sister Rita Gaffney, his brother-in-law Mike Gaffney and his cherished mother Sadie Gregg.  He also lost his first wife, Ada Silver, to cancer many decades ago.  Cyril is survived by his nephews Barry Gaffney (Cathy) and Stephen Gaffney (Sheila) along with four great nephews:  David Gaffney; Scott Gaffney (Beth); Jeremy Gaffney (Eimile) and Daniel Gaffney (Adrian); one great great nephew Andrew and four great great nieces:  Wrenna, Kaili, Sadie and Delaney.

Cyril came to America from Scotland following World War II.  He enlisted in 1941 and served in the British RAF Quartermaster’s Office, traveling on campaigns to Italy and Africa.  He rarely spoke about what he had seen during the war but would occasionally share a funny personal story, like the first (and last) time he tried beer.  Following his discharge, he started an apprenticeship in Scotland in the fur industry, learning to process and sew furs into women’s coats.  His sister, Rita, had immigrated to America with her husband Mike and she urged Cyril to join them.  He eventually made the journey with his first wife, Ada and his beloved mother, Sadie.  Cyril joined the Tampa department store Maas Brothers, where he was made to undergo an apprenticeship in the fur department; he often mentioned that he was forced to stand and watch techniques over the shoulder of his instructor that he was already well versed in.  Eventually, Cyril became a furrier and worked his way up to the position of manager of the fur storage vault in the Tampa store.  He also traveled across Florida to other Maas Brothers stores to meet with customers to design their furs.

Upon retirement, Cyril and Bobbie traveled, visiting China when that country first re-opened to the West in the 1980’s.  Several funny stories come from that trip, including the wisdom of not asking what he was eating during the elaborate banquets prepared for tourists!  Closer to home, he and Bobbie would travel to Las Vegas or Reno or enjoy a road trip across the West.  As Bobbie’s health declined, Cyril became her loving caregiver until her death in 2012.

Cyril was a past President and Board Member of Temple Beth Israel which eventually merged with Congregation Rodeph Sholom.  Cyril and his wife Bobbie helped organize socials at Temple Beth Israel; they enjoyed the Big Band era music and dancing.  Even into his 90’s, family weddings saw Cyril “cutting a rug” on the dance floor, exhausting his dance partner and then finding a new one!  Cyril was also a Shriner and a member of the Tampa Scottish Rite.

Cyril was known to his family as “Unk” and was the life of family gatherings.  Charming, quick with a joke or a compliment, Unk brightened every event he attended.  He and his great great niece Wrenna would engage in shrimp eating contests and he loved a good steak! Unk was also a teacher of Jewish traditions to the younger family members, preparing them to take his place at the head of the Passover table.  His wit, love of life and kindliness will be missed terribly by his family, friends and neighbors.

Graveside services will be held at Beth Israel Cemetery Tuesday, March 1 at 2:00 p.m.  No flowers, please. Please donate to Congregation Rodeph Sholom or to your favorite charity in Cyril’s memory.