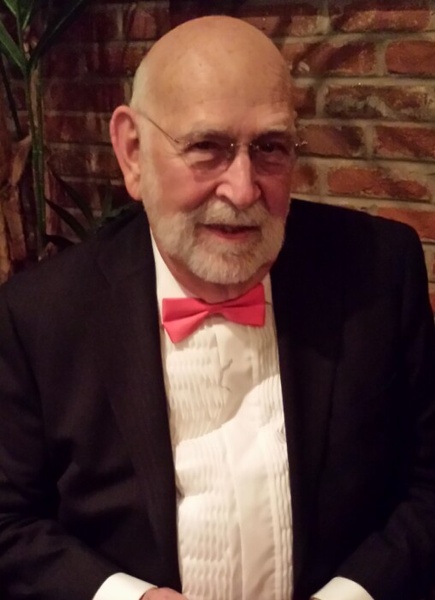 Fred was born in Sun, West Virginia where his father Dr. Charles G. Merriam and his mother Sadie Merriam were the doctor and nurse for the W. VA mining company.  Fred lived through the great depression and the suffering and hardship he witnessed made him a lifelong philanthropist and humanitarian.

As a member of the Greatest Generation, Fred served in the Fourth Marine Division in the Pacific during World War II.  After he was honorably discharged in 1946, he used the GI bill to complete his education in biology, microbiology, anatomy and physiology. He spent 42 years as a professor of Biological Sciences and Program Director of Biology at St. Petersburg College. He was honored as Professor Emeritus in 2014.

In addition to his academic career, Fred’s avocation was music and singing with his beautiful bass voice.  He sang with the Clearwater Community Chorus, the Master Chorale, and for the past 15 years in the Congregation Schaarai Zedek Koleinu choir.

Fred was an honored recipient of the Eight over Eighty award from the Jewish Federation for his love and commitment to the Jewish community.  Along with his wife, he became a World Chairman of the Jewish National Fund (JNF). Fred served on the JNF Disabilities Task Force and was passionate about taking care of the most vulnerable members of society. A garden of peace was dedicated in his honor at the Lotem nature park in Israel. Fred, who was an exemplary man of peace, has his garden overlooking the Valley of Peace.

A funeral service with the immediate family will be held at Congregation Schaarai Zedek on Sunday, June 28 at 11:00 am.  The service will be live streamed at Zedek.org/streaming so his many friends and colleagues can view the service.

The family asks that any donations be made in Fred’s honor to Jewish National Fund. https://secure.jnf.org/site/Donation2?df_id=9453&onetime=1&mfc_pref=T&9453.donation=form1

He will be greatly missed by his large loving extended family.