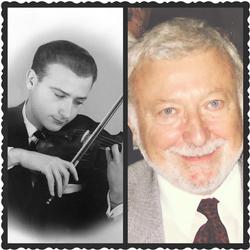 Dr. Jack Heller, Violinist, Conductor, Professor of Music Education Jack Joseph Heller, Ph.D., 83, passed away peacefully on October 19, 2016, with his wife of 59 years, Judy, and his children Lynn and Mark at his side. Dr. Heller led a rich life as a professional violinist, a college professor and researcher, a conductor, husband, and father. He was born to Max and Dora Estes Heller on November 30, 1932, in New Orleans. A child prodigy violinist, he soloed with the New Orleans Symphony for the first time at age 13, became Assistant Concertmaster of the New Orleans Opera Orchestra at 16, and shortly thereafter began his studies with the 20th century's most significant violin teacher, Ivan Galamian, first at the prestigious Meadowmount summer music institute, then at the Juilliard School in New York. Upon his graduation from Juilliard in 1952, Heller enlisted in the U.S. Army, serving three years as a member of the United States Military Academy Band, Orchestra (Concertmaster), and Chamber Ensemble at West Point, New York. After honorable discharge with the rank of Sergeant, and still before his 23rd birthday, Heller won the job of Concertmaster of the Toledo Orchestra, in Toledo, Ohio. While in Toledo, he met Judith Ann Krawetz, and the couple married in 1957. Though the young Concertmaster continued his performing career, he began further academic study in music education that led to a 50-year career as a college professor. He earned his Masters at the University of Michigan and his Ph.D. at the University of Iowa, and received his first university appointment at the University of Connecticut in 1960, becoming a full professor in 1966. Over the course of his career, he also held post-doctoral fellowships at Ohio State and Yale. In addition to conducting the University of Connecticut's orchestra and playing in the Hartford Symphony and numerous chamber ensembles, Dr. Heller eventually became the university's Associate Dean of Fine Arts. His academic work in music education was at the vanguard of research into the psychology of music, how humans learn music, how the brain processes the language of music, and music performance analysis. Over his 50 years as a professor (25 at the University of Connecticut and 25 at the University of South Florida in Tampa), Heller published numerous scholarly articles, presented papers across the globe at international conferences and symposia, and served many professional associations, including stints as President of the Connecticut Music Educators Association and Head of the Research Section of the International Society of Music Educators. He was a Life Member of the Music Educators National Conference, the Society for Research in Psychology of Music and Music Education, the Council of Music Education Researchers, the American Federation of Musicians, the American String Teachers Association, and the National School Orchestra Association. Heller left the University of Connecticut in 1985 to become the Director of the School of Music at the University of South Florida in Tampa. He held that post for ten years before stepping back into teaching and advising students and directing doctoral research until his retirement and designation as Professor Emeritus in 2011.

As a conductor, Dr. Heller directed numerous ensembles, from local to international. He was the Founder of the Nutmeg Chamber Orchestra (Connecticut), a guest conductor of the New York City Opera and the Prague Radio Symphony, and from 1992-2002 was the Music Director for Tampa's Spanish Lyric Theatre (a light opera company). Perhaps the most significant achievement of his long career in music was his deep dedication to serving his local musical communities by lending his professional talent to directing high-quality volunteer orchestras. For over 40 years, in both Connecticut and the Tampa Bay Area, Dr. Heller made deep and meaningful musical experiences available to thousands of music lovers who were teachers, doctors, professors, business people, and retired professionals from all walks of life by day. If these skilled amateurs were willing to devote one night per week to intense rehearsals (and if they practiced!), Heller was able to transform them into concert musicians performing great works at top venues. With an expert professional as their guide, thousands of people who had built a high level of skill on their instrument found great challenge and satisfaction exploring the masterworks of western classical music literature under Jack Heller's baton. Heller was the Music Director and Conductor of the Manchester (Connecticut) Symphony Orchestra from 1968-85 and of the Tampa Bay Symphony from 1986-2011. In this role, he conducted hundreds of concerts. Ever the teacher, he would explain elements of the music to the audience from the podium, creating an accessible and engaging culture that drew and held the interest of thousands of patrons. More meaningful to him, though, was the role he played in providing an outlet of sophisticated musical challenge and expression for those who loved to play. Dr. Heller was predeceased by his son David (1965-2013) and is survived by his wife Judy, his daughter Lynn Heller, his son Mark Heller, daughter-in-law Kathy Heller, and his three grandchildren: Ben Lachicotte, Kennedy Lachicotte, and Eden Heller. All three of Jack and Judy Heller's children have followed in their parents' footsteps by having prominent careers in education and music in the Tampa Bay Area. Lynn, a teacher at Dale Mabry Elementary in Tampa was recognized as Hillsborough County's top math teacher and top social studies teacher over the past 15 years, and is a vocalist at Congregation Schaarai Zedek and other venues. Mark is Head of School at Academy at the Lakes in Land O'Lakes and is a cellist and conductor. A memorial service for Dr. Heller will be held at Congregation Schaarai Zedek, 3303 West Swann Ave., Tampa, at 2:00 p.m. on Sunday, December 4, 2016.