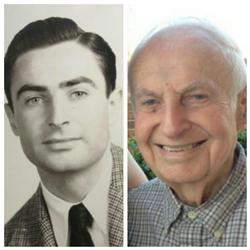 Edward loved to shock people when he said he had 12 children! It was true... and he loved them all.

Edward and his late wife Betty had 15 great-grand children.

Edward was a devoted son to his late parents Etta Furey Downing and Edward David Downing of Warwick, Rhode Island. He was the brother of Virginia Downing Miller of The Villages, Florida and also of the late Robert Downing formerly of Cranston, Rhode Island.

Edward was a graduate of Mount Pleasant High School in Providence.

Edward joined the Rhode Island Naval Reserves in 1939. He attended boot camp in Newport, Rhode Island, and Naval Training School in Toledo, Ohio. He was stationed at the Jacksonville and Banana River Naval Air Stations in Florida. During World War II, he was a First Class Petty Officer for Headquarters Squadron Fleet Air Wing Two at the Naval Air Station in Kaneohe, Hawaii.

Edward was a Providence, Rhode Island Fire Department Lieutenant with 23 years of service when he retired in 1969. He was a Past President and long time Secretary of the Providence Firefighters Local

Edward was a Third Degree Knight of Columbus.

After his firefighting career, Edward was an Accounts Maintenance Clerk at the US Naval Commissary at Quonset Point, Rhode Island from 1969 until it closed in 1973. He was then one of the original employees of the Rhode Island State Lottery System from which he retired in 1981 as the Ticket Accounting Supervisor.

While a resident of West Warwick, Rhode Island from 1972 to 1983, Edward and his wife Betty owned and operated Hebert's Mini Market on Pond Street.

Always looking to improve his skills, In 1971 Edward took classes at Roger Williams College (now University) in Bristol, Rhode Island in Accounting I. He continued advanced Accounting II classes at Pilgrim High School in Warwick, Rhode Island. Then classes in 1975 took him to the University of Rhode Island to prepare him for his Real Estate License which he attained. In 1981 he completed 152 hours of instruction at James L. Hanley Career and Education Center in Providence, Rhode Island for Printing Training.

Edward, and his late wife Betty, moved to Brooksville, Florida in 1983. There, he was a 10 year Commander of the Brooksville American Legion Post 99 from 1986-1996 and past Commander of the Hernando County Council For Veterans Affairs. He performed military honors at the funeral services of more than one thousand Veterans.

While in Florida, Edward continued his quest for knowledge by studying at the Pasco-Hernando County Community College in Dade City, Florida in 1984-1985 to obtain his Florida Real Estate License.

This writer will never forget that evening's mail call. Each veteran participated in a mail call similar to the mail call they experienced while serving their country. Each veteran received letters from their family filled with words of love and pride and youthful pictures of themselves in uniform. The tears flowed with love, remembrances and happiness that night!

After Edward lost his wife Betty, he was watched over and lovingly cared for by his children. Always appreciative of a pretty female smile, Edward welcomed living at various times with his five beautiful daughters in their individual homes...most recently in Orlando with his resourceful and ever patient daughter Denise. His male bonding and sports needs were well supported by Denise's sons David and Jeff and the very special Bob Horner, Edward's two sons, his son-in-law, the ever special Mike Lees and the infamous Muzzy, Storm and Kane!

In April 2015, Edward moved into the Baldomero Lopez State Veterans' Nursing Home in Land O'Lakes, Florida where he peaceful passed away.

Edward's family will always be grateful to the nursing staff and caretakers, professionals, and all other departments including the oh so important food service and laundry personnel, who took care of our dad. A special thank you to his co-residents who befriended him and us.

If you choose, Memorial donations in honor of Edward can be sent to any Salvation Army organization of your choice. Edward was grateful for the many times the Salvation Army came with coffee and food while he and his co-workers fought blazing fires during his career with the Providence Fire Department.

This ever hardworking, strong, brave, generous, thoughtful, sweet, always ready with a smile, loving man will live on in our hearts!