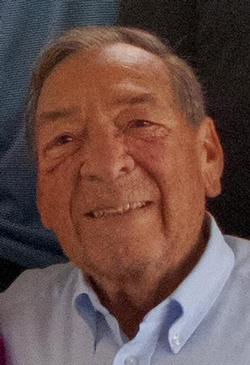 BOBO, Eli, age 89 of Tampa died Thursday, January 22, 2015 at home, surrounded by his loving family. Mr. Bobo was born in Jacksonville, Florida to the late Ralph & Salha Bobo. He resided for a brief time in Macon, Georgia and New York before coming to Tampa in 1946 and was among the founders of the family business, Blue Ribbon Supermarkets which he operated along with his mother. He was a beloved member of Tampa's Jewish community, was a lifelong member of Congregation Rodeph Sholom and served the congregation's board of directors during which time was instrumental in relocating the synagogue to it's present, Bayshore Boulevard location. In addition he was a 32nd Degree Mason and Shriner. He was preceded in death by his sister, Rachel Marcadis. Survivors include his beloved wife of 62 years, Chella, sons and daughter-in-law, Ralph & Michelle Bobo, Bobby Bobo and Michael Bobo, daughter and son-in-law, Sylvia & Mitch Bernatsky, brothers and sisters-in-law, Ezra & Gloria Bobo of Brooklyn, NY, and Sammy & Rieva Bobo, sisters and brother-in-law, Latifa Cohen of Atlanta, Pauline Rophie, Clearwater, and Emma & Jerry Breslaw, Miami and his brothers-in-law, Sam Marcadis and Nathan Marcadis (Pat Terpack).His family was his life which was evident in his relationship with his ten cherished grandchildren, Gil Barzilay, Rachel Bobo, Eli Bobo, Adam Bernatsky, Abe Bobo, Evan Bobo, Rachel Bernatsky, Joey Bobo, Sarah Bobo and Jacob Bobo along with numerous nieces and nephews. He will be dearly missed by all those, who knew him and loved him. Funeral services will be held today (Friday), 1:00 PM at Congregation Rodeph Sholom, 2713 Bayshore Boulevard, Tampa. Interment will follow at Rodeph Sholom Cemetery. In lieu of flowers memorial contributions may be made to the Torah Writing Legacy Project at Congregation Rodeph Sholom.