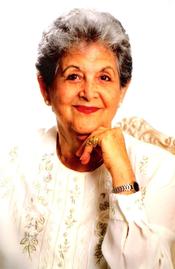 WEISS, Esther Newman, 90, of Tampa, passed away on December 9, 2013. Upon her marriage in June 1959, Mrs. Weiss moved to Tampa from Flushing, New York. She was preceded in death by her husband, Leo Miller Weiss. Survivors include her cousin David Sackeroff of Seattle and Bainbridge Island, Washington; her loving niece Lisabeth Degnan of Savannah, Georgia; nephew Eric Lander of Philadelphia, Pennsylvania, and other nieces and nephews. During WWII, Esther worked for the War Department at the New York Port of Embarkation that supplied ordinance materials for troops overseas. During the 1950s, Mrs. Weiss was a radio information specialist at the Manhattan studios of the United States Information Agency's Voice of America and attained the position of assistant producer of the American Theatre of the Air which generated a series of dramatic broadcasts worldwide over the Voice of America. After her marriage and relocation to Tampa, Esther began to volunteer as a Braille transcriber and went on to become a teacher and coordinator in the program. Her service spanned twenty years and was sponsored by the Congregation Schaarai Zedek Sisterhood. Both Esther and husband Leo were antique enthusiasts with expertise centering on American cut glass crystal. They established the Edelweiss Antique Shop in Tampa which operated for five years. Esther was a devoted member of Congregation Schaarai Zedek and member of the American Cut Glass Association. In lieu of flowers, donations may be made to Congregation Schaarai Zedek. The graveside service will be held on Friday, December 13th, 1:00 PM, at Myrtle Hill Memorial Park Cemetery, with Rabbi Richard Birnholz officiating.