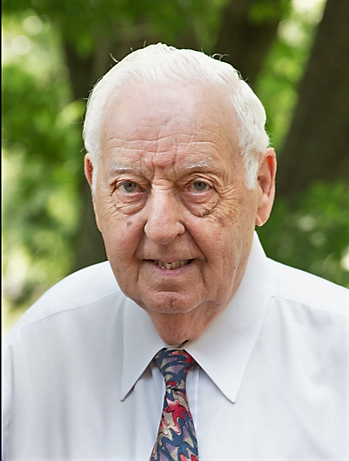 Dr. Irvin Strathman died on March 25 at the age of 93,  He was born on September 18, 1923 at Toronto Western Hospital, just a few blocks from where his parents Ethel and Sam Strathman rented an upstairs flat from a landslady who came from the shtetl near Berdichev where his mother was born.   Dr. Solway who delivered him, came to the hospital on bicycle.  At the age of 5, his parents moved to Orillia where he grew up in Leacock’s Mariposa.   He went to medical school at the University of Toronto where he graduated on February 22, 1946 at the age of 22.   During his time there he was on the MEDS lacrosse team that won the university championship; was vice president of the Medical Athletic Association, and was a founding member of Hillel House at the University of Toronto in 1945.     After six and a half years of postgraduate training in Windsor, Ontario, Chicago, and Ottawa, Ontario, he started the practice of Obstetrics and Gynecology in Windsor, Ontario on June 12, 1952.  Over the next 25 years he delivered over 7000 babies, introduced laparoscopy, in Windsor in 1972, and was president of the Essex County Medical Society.  On February 1, 1976 he joined the GD Searle Pharmaceutical Company in Skokie, Illinois where he worked for 11 years.  During that time he monitored clinical research studies, became Director of Medical Affairs, computerized the post marketing drug surveillance system, and wrote the White Paper which led the FDA to approve the marketing of intravenous metronidazole.  In October 1986, he became a consultant to the NutraSweet Company where he helped develop and monitor a consumer inquiry and complaint system.  When Dr. William Spellacy became chairman of the Department of Obstetrics and Gynecology at the Medical School at the University of Illinois in July 1979, Dr. Strathman joined the department as an assistant volunteer professor.  During his time there he helped develop a Family Planning Clinic which grew from one examining room to its own department with a large waiting area, eight examination cubicles, intake and exit nursing supervision, and provided a great service to the inner city community.

In September 1991, he moved to Tampa, Florida where he joined the OB/GYN faculty of the Medical School at the University of South Florida.  He ran the gynecology clinic at Genesis where he cared for women and taught medical students and residents with empathy and equanimity, retiring at the age of 79.

He was predeceased by his loving wife Mary on July 3, 1986, after 38 years of marriage and his dear son John David in 2002.  He is survived by his sister Helen, his children Susan, Michael and wife Karen, Judy, and Alan, and his grandchildren Shyla and Sam.  He is survived by his dear wife Claudia whose love and care made the last 19 years of his life a wonderful adventure.  He is also survived by Claudia’s sons Joseph and wife Rose, David, Richard and wife Marie, and William and wife Christine and grandchildren Anica, Kimberly, Kevin, Richard, Liane, Ryan and Benjamin.  Claudia’s sister Candy Vandercar, her husband David, daughter Ashley and grandson David were an important part of Irvin’s extended family.

Funeral Services will be held Tuesday, March 28 at 10am at Congregation Rodeph Sholom , 2713 Bayshore Blvd. followed by burial at Tampa Jewish Memorial Gardens.  At the request of the family, in lieu of flowers, donations may be made in his memory to Rodeph Sholom Sisterhood, Dr. William Spellacy Fund at the University of South Florida Medical School Department of Obstetrics and Gynecology or LifePath Hospice, Burgundy Team.