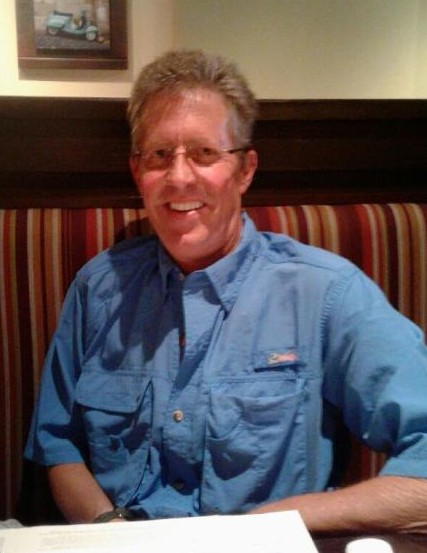 Ryan, James "Jim"
53, resided in Tampa, Florida (formerly of Crystal Lake,IL) entered into eternal rest Christmas morning 2016.  He was born February 5th, 1963, in Chicago, to Joyce (Randall) Ryan William T. Ryan, the eldest of four children.  He was greeted in Heaven by his next born sister, Diane Pfeiffer (Ryan) who also passed from lung cancer on 28th June 2012, and his father whose own battle with the disease was fought while all his children were young adults.

Jim trained as an Electrician's Apprentice. He then attended the University of Wisconsin Stevens Point.  While studying on the campus lawn one day inspiration struck as a pair of fighter jets flew overhead, he decided he wanted to fly in one.  He visited an Air Force Recruiting Station where he learned that his height and eyesight prevented him from flying.  Undeterred, he pressed on, determined that if he was unable to fly in one, he would learn what what makes them fly.  He graduated from his training class in the top 1% of all Airborne Mechanics and was assigned to a combat-ready squadron of F-15 fighter jets stationed in Valdosta, Georgia, who flew missions worldwide.  Jim joined the crew that flew with the fighters they maintained as “combat ready”.   The planes were serviced on location to get back up up in the air immediately after adjustments. This required they work days that often exceeded 16 hours and an always "on call" status that contributed to a high level of mechanic burnout.

After his initial 4 year commitment, a much-needed change of pace and scenery led to a move to Florida. Here he worked in HVAC, fine dining banquette management, and boat building. After 7 years, his mother called him to inform him of the loss of his stepfather.  She needed his help running a business in northern Wisconsin and this time Jim used the spare time he had while living with her to open his new business, a professional fishing guide service.  He continued this service for 6 years traveling deep into the wilderness with clients.

Yet again, the itch for change led him to travel.  He drove south through the state to the town of Wisconsin Dells,  and fell back on his hospitality skills to save for a move back to Florida.  It was here that he met his wife of 20 years, Penny (Frazer) Ryan, who was going to college and working at the same time to avoid student loans.  He convinced her to join the Air Force in order to pay for college.  They wed September 19th, 1997, and started their Air Force journey together on 19th December of the same year.

He followed her to training in Biloxi, Mississippi for 10 months. While there they endured Hurricane George, a category 3 storm, where Jim led a group of neighbors to protect their apartment complex from looters.

The couple moved on to Warner Robbins, Georgia in December of 1998 for her first assignment. Here, Jim managed the maintenance for a 500 unit apartment complex.

In 2002, they moved on to Ansbach, Germany, where he functioned as an independent contractor, building furniture, bikes, and grills for retail and then briefly working for the post office.  His infectious enthusiasm melted even the toughest of personalities, including their host landlord, who previously refused to smile at americans.

The couple returned to the states and their military retirement location Tampa, Florida in March 2006.  Here they worked together to deliver food to a local pantry for the homeless and volunteered for local retirees until in July 2007; when Penny was diagnosed with cancer.  Jim became her advocate and devoted caregiver for the next nine years.

In 2014 he began attending Adult Children of Alcoholics meetings (ACOA) in St Petersburg, Florida.  In July of 2015 he created a weekly meeting in Tampa, which is still flourishing today.

In August 2016, he was diagnosed with stage 4 lung cancer; he spent the next 5 months demonstrating his love for his family.
Jim was a truly giving person, who could get anyone to smile and laugh and would help anyone who needed it.  His earthly departure will be felt around the world.
He is survived by his wife, Penny (Frazer) Ryan, his mother, Joyce Ryan, his sister, Sharon French and fiancé, Rick Clegg, his brother, Bill Ryan, his nieces, Lauren French, Ashley Fuery, and Tiffany Ryan; his nephews, John Fuery, Andrew Ryan, and William Ryan; his  great-nieces Emma, Lyla, Rosalie, and great-nephews John Riley, Rudy, and Yoshua.
His celebration of life ceremony is at 11 a.m., Dec 31st at Palma Ceia United Methodist Church at 3723 Bay to Bay Blvd, Tampa, FL 33629
There will be a memorial service to spread his ashes and commemorate a bench in his honor on Feb 5, 2017, 1PM, at Bobby Hicks Park in Tampa [4201 W Mango Ave, Tampa]   gofundme.com/jims-memorial-fishing-bench

In lieu of flowers, a fund has been created for the bench, or you may donate to a charity that teaches kids to fish (in his honor). https://impact.castforkids.org/checkout/donation?eid=69672