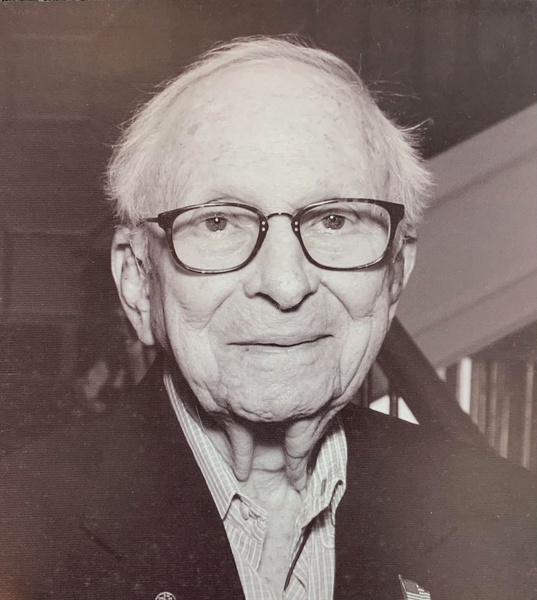 101, of Tampa, passed away peacefully at home on February 21, 2022. Born July 1, 1920, in Washington, D.C., where he grew up and attended George Washington University prior to enlisting in the U.S. Army Air Force. Jean was stationed at Drew Field in Tampa as a sergeant in the Signal Corps. It was here that he met Ruth Smith, the high school daughter of family friends from Washington. When Ruth graduated from Rollins College, Jean and Ruth married. Their wedding was one of the first grand events in the ballroom of the old Tampa Terrace Hotel in downtown Tampa following its re­opening after the end of World War II. Jean joined his father-in-law Harry K. Smith and his new uncle Harry Porton in their wholesale tire, parking and automobile service business across the street from the Tampa Terrace at the corner of Florida Avenue and Lafayette (now Kennedy) Boulevard. The motto of Smith & Porton, Inc. was The City Hall is opposite us. So was Tampa’s central police station, and a block down on Franklin Street was the old Hillsborough County Courthouse. When the family sold Smith & Porton in 1966, Jean took Ruth on a three months around-the-world trip. On his return, he was invited to join the Marine Bank Travel Department, beginning a 55 year career as a leisure travel specialist. Jean drove to work until the Covid-19 pandemic, after which he continued to participate by computer. By this time, Jean & Ruth had traveled to virtually every corner of the world.

Jean was a tireless Tampa booster. His more than 75 years of service to Tampa causes grew naturally from his affection for his adopted city and his belief that all people are important. He was uniformly respectful to everyone and genuinely interested in what people had to say. He was a non-denominational, non-sectarian, colorblind Good Samaritan. As a quick point of reference, Jean both served his synagogue as President and as the longest-tenured Board member of St. Joseph’s Hospital alongside Sister Marie Celeste. Jean was a global traveler who enjoyed meals at the finest restaurants in the world and yet made local cooks feel as if they were Three Star chefs. Jean never learned how to say No. His motto was, Just say Yes.

In addition to Jean’s more than 30 years on St. Joseph’s Hospital Development Board, including as its Chairman, and his Presidency and Board service at Congregation Schaarai Zedek, Tampa’s oldest Jewish congregation, Jean for more than 20 years was a mainstay at the American Cancer Society, including as Chairman of the Annual Campaign. Jean served Tampa’s oldest Rotary Club in practically every volunteer capacity possible, as a committee chairman, board member and as President. Recognized as a Paul Harris Fellow, Jean had 64 years of perfect attendance at Rotary, more than half the Club’s 125 year lifetime! Jean founded the Florida west coast chapter of the international Burgundy wine society, the Confrérie des Chevaliers du Tastevin, organized in France in 1934 to celebrate the culture of Burgundy, whose vineyards have been designated a UNESCO World Heritage Site. Jean was a Commandeur in the New York chapter before serving as head of the Florida group for a dozen years. Jean was recognized in December 2021 by the Tastevin for his knowledge of wine and active leadership in the group for more than 60 years. Having enjoyed membership in the Miami chapter of the Chaine des Rotisseurs, the international food society founded in 1245 and reorganized in 1945, Jean was asked to establish a second Florida chapter in 1972. He did so, and served as its head for more than 20 years. He supported and encouraged local restaurants and hotels to strive to be innovative and better. Jean helped organize new Chaine chapters in St. Petersburg, Sarasota, Ft. Myers, Naples, Orlando and Tallahassee and served as head of the Chaine’s Southeast United States and Puerto Rico region. Jean also served as a member of the board of directors of the H. B. Plant Museum Society; as a founding member of The Tampa Club; a 32d degree Mason; and a leader of the Greater Tampa Chamber of Commerce and Committee of 100. Jean received the Model in Aging Lifetime Achievement Award from Seniors in Service of Tampa Bay, Inc. in 2005.