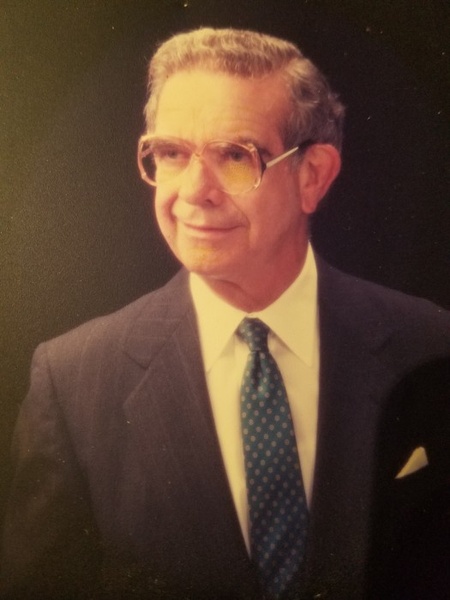 Jerry Schine, a man known for his strong ethics, brilliant mind, and his nightly martini, died Friday, 17 January 2020. He was 93. Born and raised in Albany, Georgia, Jerry attended North Georgia Military School [now University of North Georgia]. He entered service in the Army Air Corp in 1945, and graduated from the University of Florida in 1949. He went to work the same year for M.A. Montenegro & Company, and passed the CPA exam at the first sitting the following year with the highest grade. In 1952 he became a partner, and later co-managing partner. In 1970 he became managing partner of the Tampa office as a result of the firm's merger with Arthur Young [now Ernst & Young, EY]. He remained managing partner until becoming senior partner shortly before mandatory retirement in 1987. Jerry was chairman of many committees for Florida Institute of Certified Public Accounts [FICPA], ​chaired the committee which rewrote​ the Florida Accountancy Laws in 1969, and president of the FICPA in 1973. He was appointed to the Florida Board of Accountancy, and served as chairman in 1985. Also, he was a Member of the Council and National Review Board of the American Institute of Certified Public Accounts [AICPA] for six years. Jerry was active with the National Association of State Board of Accountancy [NASBA], chairing committees, board member, and became President in 1989. He also served on the CPA Examination Service Board for six years. He served on the steering committee of the Fisher School of Accounting, University of Florida for 12 years; followed by 4 years on Steering Committee on Ethics at the University of Tampa. He was a guest lecturer at UF, FSU, and USF, and received numerous recognitions and awards in his profession and for his ethics. Jerry volunteered his time and energy for the Tampa community. In 1964 he served on the Hillsborough County Local Government Study Group, which led to writing a consolidation plan. This became the blueprint for Duval/Jacksonville consolidation. He was President of Temple Terrace Golf & Country Club in 1962, and frequent treasurer. ​As a member of Congregation Rodeph Shalom Jerry was instrumental in securing funds to build the south Tampa synagogue and served as treasurer numerous times during the 50's, 60's, and 70's. ​He served as a member of the board for Childrens Center for Cancer and Blood Disease for six years in the 80's. He was a member of the Tampa Museum of Art [TMA] board for six years in the 80's and president in 1984. Jerry served as a member of the Tampa General Hospital [TGH] Task Force 1985-87.  Jerry was a member of Tau Epsilon Phi Fraternity, The University Club, Avila Country Club, and currently is a member of Congregation Schaarai Zedek.A private graveside service was held on Friday, 17 January, 2020, officiated by Rabbi Simon, Rabbi Farb, and Cantor Cannizzaro. Preceded by his parents Nathan and Celia Schine, brother Myron, and wife of 57 years Marjorie Clark Schine. He is survived by his son Michael Howard Schine of Tampa. For the past six years Jerry missed Margie most at the cocktail hour. He was fortunate to meet and make strong friends at Canterbury Tower to share his Bombay Sapphire Gin Martini [dirty, dry, and up] along with a toast, joke, or both at The Bottle Stop nightly. His companion and co-conspirator for almost all Canterbury cocktails, dinners, and events was Charlcy Griffin, who never met a stranger and made his final years more enjoyable. A Memorial Celebration of Life is planned for Friday, 24 January, 3 PM, at Congregation Schaarai Zedek, 3303 W. Swann Ave, Tampa, FL; to be followed by a Martini-Bar Reception at the home of his son, Michael. ​Donations may be made to Tampa Jewish Family Services ​https://tjfs.org/donate-and-volunteer/donate-now/​, or any charity of your choice. May his memory be a blessing to all who knew, respected, and loved him.