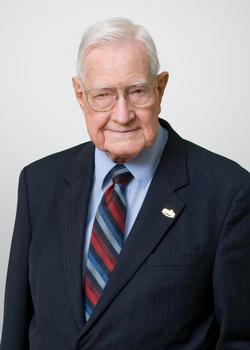 John Arthur Jones, 92, died peacefully in his Tampa home on August 12, 2014. John Arthur leaves behind four children, seven grandchildren and two great grandchildren. His beloved wife, Sally, passed away in 2013. John Arthur spent his final days in his waterfront home overlooking Tampa Bay, where he enjoyed feeding the herons and egrets every afternoon, a tradition his wife Sally had maintained for years.

John Arthur is being remembered as a consummate provider, devoted father and husband, a war hero, and a nationally-acclaimed lawyer.

In 1949, John Arthur joined the Tampa law firm of Knight, Thompson, & Turner; which ultimately became the international law firm Holland & Knight. John Arthur partnered with Chesterfield Smith to build the firm and the iconic Holland & Knight name. When persuading various partners to accept the name Holland & Knight, he often joked it was either that or Smith & Jones.

In legal circles, John Arthur was known as "Mr. Probate" and the "Father of probate law". He served as Chairman of the Florida Probate and Guardianship Forms Committee and developed what's widely recognized as the most comprehensive set of probate and guardianship forms in the country. He was also a noted expert in banking and real estate law. John Arthur's professional colleagues across the country are remembering him fondly as a great lawyer, a wonderful mentor, and an even better friend.

John Arthur was born in 1921 in San Antonio, Florida. During World War II, he served with distinction in the European Theater under the command of General Patton's 3rd Army and received a Bronze Star for his actions in the Battle of Metz, France. Thereafter, the men of the 95th Infantry became known as the "Iron Men of Metz" for their capture and defense of the castle and river crossing in the city of Metz against several determined German SS Armored and Infantry Divisions. John Arthur ultimately finished his military career through the reserves and attained the rank of Lieutenant Colonel.

John Arthur married the love of his life, Sally, in 1949 shortly after his graduation from the University of Florida College of Law. They were blessed with four children: Matthew, Lisa, Malcolm and Darby.

The professional designations and awards received by John Arthur during his career are too numerous to mention. He was the very first recipient of the William S. Belcher Lifetime Professionalism Award, and the Florida Bar's Real Property, Probate & Trust Law Section annual service award is named after him.

Holland & Knight has also honored John Arthur many times over the years. He was one of the first recipients of the firm's highest individual accolade for a partner, the prestigious Chesterfield Smith award. In addition, the reception area and conference room in Holland & Knight's Tampa offices are named in his honor.

Integrity was certainly one of John Arthur's hallmarks throughout his entire life. He frequently said, "You can't afford not to be honest and not do your best."

To further honor and remember John Arthur, Holland & Knight is welcoming everyone to celebrate John Arthur's life at a memorial visitation at Palma Ceia Country Club on August 20 from 5 - 7 p.m. At a later date, there will be a private family ceremony for both John Arthur and his wife Sally in Joshua Creek Cemetery in Arcadia. In lieu of flowers, two memorial funds have been created. Contributions may be directed to the University of Florida Law School to establish the John Arthur Jones Memorial Scholarship. Please make checks payable to the Law Center Association, P.O. Box 14412, Gainesville, Florida 32604-4412 and include fund #012879 in the memo line. Or, memorial contributions may be directed to Bay Area Legal Services at 1302 N. 19th Street, Suite 400, Tampa, Florida 33605. Donations will be used to establish an Endowed John Arthur Jones position at Bay Area Legal Services for the delivery of legal services to Elders in need.