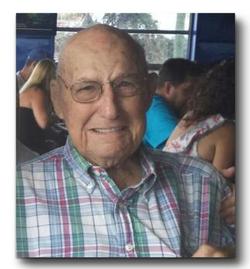 COHEN, Marvin M, age 89, passed away July 10, 2015 in Tampa. He was born in Chicago Illinois, a graduate of Marshfield High School in Wisconsin and attended college at Stevens Point State Teachers College and University of Wisconsin, Madison. Marvin was a World War ll Veteran serving in the European- African Middle Eastern Theater from 1943 to 1946. He worked in auto sales for General Motors for over 50 years ; known as "the Man with the hat". He moved from Whitefish Bay Wisconsin to Cape Coral Florida and lived in Cape Coral for 37 years . He enjoyed fishing, camping, photography and loved golfing; in which he golfed FOUR "Holes-in-One". Preceded in death by his parents Meyer and Fay Cohen and his brother Harley. He is survived by his wife of 59 years Diane "Stauff" Cohen; three children; Stephanie (Stephen) Storch, Mark (Celeste) Cohen, and Daniel Cohen; five grandchildren Michael and Katie Pupello, Monica and Steffi Jo Burke, and Emily Cohen; two sisters, Dolores Pittelman "Diddy" and Myra Gordon; and many great friends and family. Graveside service to be held at Sarasota National Cemetery on Friday, July 17th at 10:00am. In lieu of flowers donations can be made to the Pediatric Cancer Foundation https://fastercure.thankyou4caring.org/DonateNow or Melech Hospice House, LifePath Hospice 12470 Telecom Drive, suit 300 Temple Terrace, FL 33637.