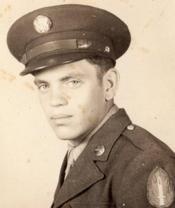 Max Friedman was born August 9, 1924. A true soldier, he left this world on Memorial Day. Meckey, as his family and friends knew him, was born in New York's Lower East Side and moved to Williamsburg, Brooklyn at age 9. He enlisted in the Army at age 18 and served in WWII as a Private First Class in the Third Infantry. During this time he was captured and imprisoned in a German POW camp, from which he was able to escape. He returned from the war and married his true love, Muriel. They would have celebrated their 64th wedding anniversary June 1st.

Meckey was an avid animal lover and saved many from starvation and abandonment.

Survivors include his loving wife Muriel; his adoring daughter and son-in-law Barbara (little Meckey) and Barry Frank; his grandson David and fiancAC. Erika; and granddaughter Tracey (his Shenky Maidel). He also leaves behind a large extended family in New York, Alaska, Florida, France and Mexico. He will be greatly missed by all who knew and loved him.

The family would like to thank Dr. Lin, Dr. Weinstein and the staff of Fresenius Dialysis Center for all of their support.

Funeral services will be held 3:00pm Friday, June 3, 2011 at Gan Shalom Cemetery in Lutz. In lieu of flowers memorial contributions can be made to BigCatRescue.org