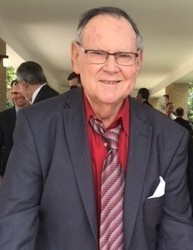 ***In memory of Michael, please wear Brooklyn Dodgers or any other blue and white sports-like apparel to the service if you're able to. Thank you!***