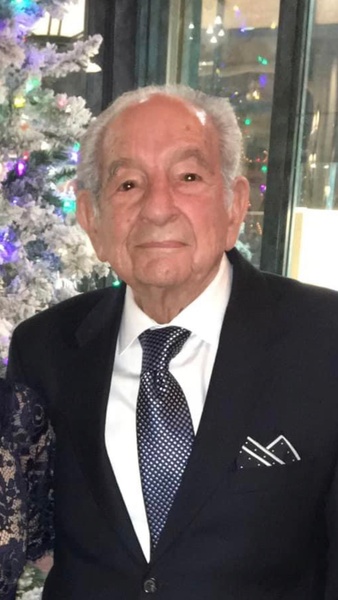 Nathan Marcadis was born on March 16, 1931, the last of three children to Abe and Annie Marcadis, who were born and raised in Israel before immigrating to the U.S.  Nathan was raised in the central part of Tampa, the Seminole Heights, Tampa Heights and Riverside Heights triangle.  He attended Jefferson High School where he graduated in 1950.  He subsequently served in the U.S. Army from 1953 to 1955, where earned the rank of Sergeant First Class and was awarded the Korean Service Medal and the U.S. Service Medal for Good Conduct.  He then entered the National Guard where he served another year before being Honorably Discharged in 1956. After his service, he joined his father’s company, Abe’s Bail Bonds, one of Tampa’s original and preeminent bail bonds businesses, where he worked with his father and brother as a bail bondsman for 40 years before retiring at the age of 65. On December 4, 2015, he married his longtime love and life partner, Patricia “Pat” Marcadis.  He treated Pat’s children and family as if they were his own, even before their marriage, and he was greatly loved by them in return.  Although he never had biological children, he was very close to Sam and Chella’s kids and grandkids.  He loved and adored them, and they loved and adored their “Uncle Nasco.”  He was a hard worker, a loyal family man, and had a clever wit and a dry sense of humor.  He will be dearly missed.
He is predeceased by his father, Abe Marcadis, his mother, Annie Marcadis, his brother, Sam Marcadis, his sister-in-law, Rachel Marcadis, his brother-in-law, Eli Bobo, and his great nephews, Louis M. Bobo, and Eli A. Bobo.  He is survived by his wife, Pat, his sister, Rachel “Chella” Bobo, his stepsons Michael Lee Jones (Salve, daughter Trina Marie, and son Michael Patrick Nathaniel) and J. Todd Fernandez (Giovanni), his nephews, Ralph Eli Bobo (Michelle), Abe Marcadis (Betsy), Abraham (Bobby) Bobo, Ralph Marcadis (Margot) & Michael Bobo (Julie), his nieces, Annette Marcadis, Sylvia Bernatsky (Mitch) and Sharon Finley (Brian), and his great nephews and nieces, Gil Barzilay (Tanya) and son Axel, Rebecca Marcadis, Rachel Bobo, Stuart Marcadis, Adam Bernatsky, Andrea Marcadis, Abe Bobo, Evan Bobo, Rachel Marks (Mike) and son Miles, Sam Marcadis, Joseph Bobo, Philip Marcadis (Elana) and son Samuel, Sarah Bernstein (Blake), Jacob Bobo, Jacob and Rachel Harris, Max, Micah and Tali Finley.  Services will be held graveside at Rodeph Sholom Cemetery on Friday, June 3, 2022, at 3:00 PM. In lieu of flowers, the family would prefer memorial donations be made to Congregation Rodeph Sholom in Nathan's name.