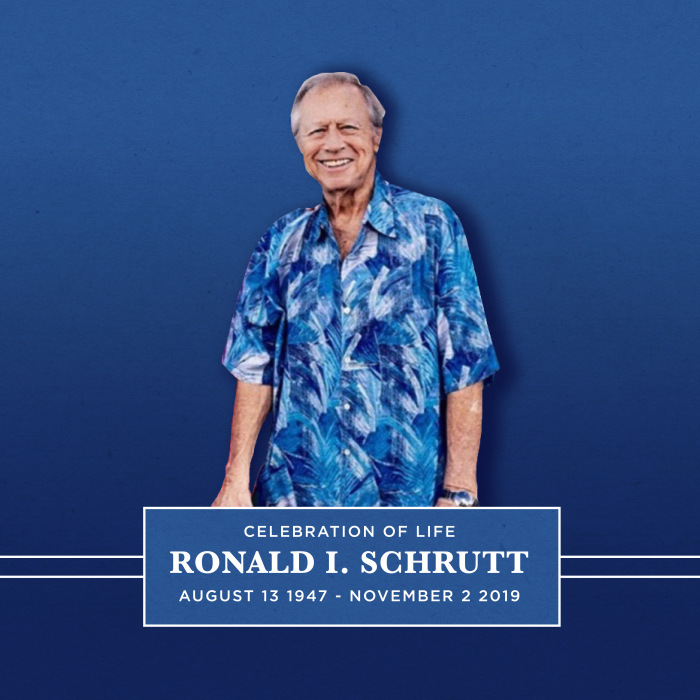 SCHRUTT, Ronald I., age 72, of Lutz, passed away on November 2, 2019. Born in Buffalo, New York on August 13, 1947, to Benjamin and Shirley Schrutt, Ron enjoyed playing all sports: basketball, football and baseball which he received a college scholarship to play at Southern Illinois university. While attending SIU he studied communications and desired to be a sports anchor. It was during his schooling at SIU, in 1967, where he met Diane Fishman. On August 14, 1971, the two were married in Chicago and then moved back to his hometown of Buffalo, New York where Ron began his career in broadcast media at radio station WWOL.

On May 2, 1975, Ron & Diane welcomed the birth of their first Son, Theodore “Teddy” Schrutt, and three years later, on June 4, 1978, they became parents again to their youngest son, Stephen Schrutt. Ron’s career took him from working in radio to television in Buffalo and led him to stops in Sacramento, California to Tampa, Florida and then to Atlanta, Georgia and finally back again to Tampa where he made a home for over 30 years. It was in Tampa, where Ron’s career took off while living and raising his family in Carrollwood Village. His career led him from top account executive of WTOG 44 TV to becoming the Local Sales Manager for 17yrs prior to retiring in 2012. He was highly respected, admired, recognized and successful in his industry.

In his free time, Ron enjoyed swimming with his family, cooking out, cars, attending concerts, movies, watching sports, spending time with friends, dining out, watching and coaching his sons play sports. He enjoyed socializing and being around friends, as well as making new ones. He always enjoyed attending events and looked forward to any occasion that he could be the best dressed guy in the room. Ron was very smart, funny, charming, loyal and was dedicated to providing a good life for his family. He always enjoyed watching his favorite team, the Buffalo Bills, with his sons, friends and was a proud lifelong Bills fan.

In 2011, Ron’s oldest son Teddy & his wife Kelli were married, and in 2013 Ron & Diane were promoted to grandparents with the birth of their first granddaughter Ramsey, and again in 2016 when their youngest granddaughter Berkeley was born. Ramsey gave her grandpa the nickname “Go Go” because when she was a baby she would watch football with him and he was always yelling, “go go“ at the TV during FSU and Buffalo Bills football games.

Also in 2011, Ron helped his youngest son, Stephen, open his first restaurant and bar, The Avenue, in downtown St. Petersburg, which has always been a special place to the Schrutt Family.

Ron's biggest enjoyment in retirement was spending time with his family. Whether it was giving his sons business advice, life lessons, celebrating birthdays, holidays or being at events he was very proud of the family he and Diane had created and the life they built together. He was very proud to be a good friend, brother, husband, father, and grandfather. He adored his wife of 48 years, Diane; his two sons, aka his boys, Teddy and Stephen; his daughter-in-law, Kelli; his two granddaughters, aka his girls, Ramsey and Berkeley; his sister Lisa, and all of his family members and close friends. He will be sorely missed by all those who knew him.

A memorial service will be held Thursday, November 7, 2019, at 2:00 pm at Congregation Beth Am, located at 2030 W. Fletcher Avenue, in Tampa. In lieu of flowers, memorial contributions can be made to The National Kidney Foundation of Florida.