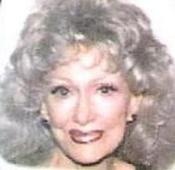 94, of Tampa, passed away on November 3, 2012. She was born in Nauvoo, Alabama to the late James and Mattie Hyde on January 17, 1918. She was an award winning dancer having had an earlier career in show business. She and her late husband, Sol Rosenfeld were owners of S & J Mobile Home Sales. She became a world traveler in her later years.She was preceded in death by her husband, Sol Rosenfeld, brother Curtis Hyde of Tennessee, sister Edra Williams of Michigan. Survivors include her two daughters, Janice Frushon (Ronald) of Sun City Center, Florida and Anita Frogge (Charles) of Homosassa, Florida, four grandchildren, Baron Williams (Rosanne) of Tampa, Florida, Steven Weiss (Miriam) of San Jose, Costa Rica and David Llerena (Leslie) of Palmetto, Florida Yvette Fridley (Donald) of Philadelphia, Pennsylvania and eight great grandchildren and one great -great grandchild.. In lieu of flowers memorial contributions may be made to Congregation Schaari Zedek Cemetery Fund or the Jewish National Fund. Graveside services will be Tuesday, November 6, 2012, 2:30pm at Schaari Zedek Cemetery, Tampa.