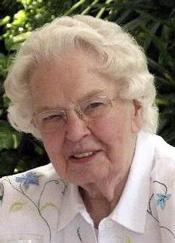 87, of Tampa, died on November 12, 2012. Mrs. Mora moved to Tampa in 1961 where she lived on Davis Island for 44 years. A native of Lansing, Michigan, Mrs. Mora attended Michigan State University and was a member of Zeta Tau Alpha Sorority. Prior to becoming a bridal consultant at Westshore Mall for Maas Brothers, Burdines and Macy's department stores, she was a founding member of the Bethany Presbyterian Day School in Miami, Florida, where she grew the student body from four to over 400 hundred students. She was a member of St. John's Episcopal Church and was preceded in death by her beloved husband of 45 years, Rodolfo "Rudy" Mora. Survivors include; daughters and sons-in-laws, Linda & Steve Warren of Alta Loma, CA, Anna & Richard Arcuri of Tampa, Angela & Ian King of Roswell, GA and four cherished grandchildren, Christina & Nicholas Arcuri and Sean & Megan King. In lieu of flowers the family request contributions are made to Metropolitan Ministry. Memorial service will be held at University Village December 3, 2012 at 2:00 p.m. followed by inurnment at St. John's Episcopal Church.