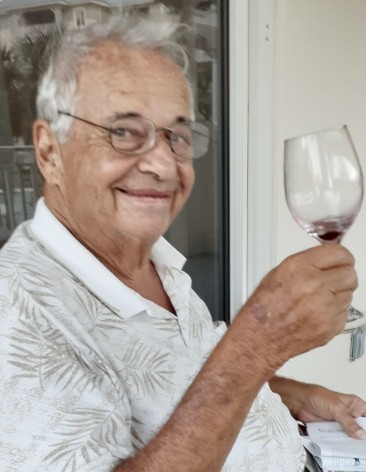 Steven Karl Schoenberg (Steve) died of natural causes surrounded by his family on April 25, 2021. He is survived by his wife of nearly 55 years, Betty Rice Schoenberg; his son Robert Shoenberg, married to Michele Greenblatt, and their children Emily and Matthew; and daughter Lisa Cohen, married to Mike Cohen, and their daughter Dalia. Steve was born in New York City to Mary and Morton Schoenberg. He loved the city and lived there until he had children. New Milford, New Jersey then became home. Steve was a proud member of the International Alliance of Theatrical Stage Employees, Local One, where he became Stage Electrician for ABC-TV. He mainly worked on news programming, doing the lighting for Good Morning America, 20/20, Day One, and Who Wants to be a Millionaire. He was fortunate to work with great people like Barbara Walters, Hugh Downs, and Diane Sawyer for 38 years. He loved to tell stories about the many celebrities he had the opportunity to meet, including one of his favorites, Muhammad Ali. Music was a passion of Steve’s. He knew and sang every word of the tunes from his youth and particularly enjoyed traditional classical music. He loved supporting the arts and frequently attended the New York, New Jersey, and then when he retired to Kissimmee, Florida, the Orlando Philharmonic. Steve and Betty enjoyed traveling around the world. Steve loved talking to and meeting new people. He loved entertaining and learning about wines and new foods. He especially enjoyed spending time with his family and friends. His grandchildren were always number one. Retirement to Kissimmee, Florida brought Steve to a place where he was surrounded by the beauty of nature. He loved animals of all kinds, especially the geckos and alligators that called his backyard pond home. Steve became concerned with the poverty in his surrounding Florida neighborhood. He was an avid supporter of local food banks and frequently handed out five dollar bills to people who he felt needed the help. In lieu of flowers, Donations to honor his memory can be made to any local food bank, Cornerstone Hospice, or Congregation Shalom Aleichem in Kissimmee, Florida.