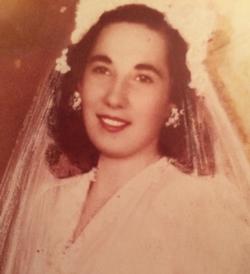 She is survived by a son, Dr. Gary Ronay, and his wife Joanne of Brandon FL., by her daughter, Judy Ronay of Monroe, NY., and by her adoring grandchildren, Michelle Rachel, Stephen, Alexander, Scott, Melissa, Jeremy, and Arielle.

Susan is predeceased by her devoted husband of 64 years, Michael Ronay and their loving son Peter Ronay.

Susan Ronay is a Holocaust survivor. In 1944, the Nazis occupied Budapest and her family was forced to live and work in the Jewish ghetto around the DohA�ny Street Synagogue. She and her mother Charlotte were deported to Ravensbruck concentration camp in Germany, where between 1939 and 1945, over 132,000 women and children were incarcerated. The vast majority did not survive.

Susan Ronay was forced to labor in a nearby rock quarry. She was beaten, starved and tortured for several months but never gave up her humanity nor did she give up her will to live.

Toward the end of the war, April 1945, Susan and her mother escaped a forced Death March from Ravensbruck by escaping and hiding in a bombed out bus in a forest. They were finally liberated by American forces and reunited in Budapest with her father, Sandor Winter. During the war, Sandor had been incarcerated in Mauthausen Concentration Camp.

Susan met and fell in love with Miklos (Michael) Reizner, (later changing their name to Ronay), from Nagyszolos, Czechoslovakian, now known as Vynohradiv in the Ukraine. Michael also survived forced labor and Mauthausen concentration camp. Michael's parents and three brothers were killed during the Holocaust. Susan and Michael were married in 1947 in the DohA�ny Street Synagogue.

Susan acquired a degree in architecture while raising their two sons. When violence broke out during the Hungarian revolution of 1956, Susan fled with her husband Michael, eight-year-old Peter, and four-year-old Gary (Gabor); walking several miles across the Hungarian-Austrian border, taken to Germany by train, and setting sail to America. They arrived on Valentine's Day 1957 in New York and were taken to Camp Kilmer in New Brunswick, N.J. The family lived in Passaic County until Susan and Michael moved to Hallandale, Florida in 1987.

Susan was an active member of Temple Sinai Hollywood, Florida, a life member of Hadassah, and she contributed to many charitable organizations. Her passion was poetry.

Susan was a devoted teacher of history, speaking proudly and passionately to schoolchildren, college students, and to educators about her experiences during the war years. Her mission was to end all forms of injustice and bigotry, and to promote tolerance and peace through the lessons we must learn from the horrors of the holocaust.

In Lieu of flowers, the family suggests memorials to the charity of one's choice.