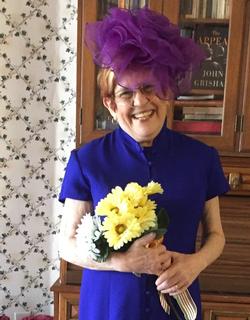 "Keep Your Face in the Sunshine and You Cannot See the Shadows, That's What the Sunflowers Do." Anonymous

Saffell, Terry On September 19, the world became a little less funny, a little less happy and a little less bright, as Terry Saffell our beloved wife, loyal sister, nurturing mother, kick-ass Auntie and treasured friend passed away. Pulmonary Fibrosis may have cruelly cut Terry's life short but there is no way it can erase the heart-print that she left on so many. 65 years is not nearly enough time for us to have Terry in our lives, but damn if those years weren't filled with riotous laughter, raucous adventures, and love... pure, beautiful, love.

Terry never ever did anything small. She loved LARGE, laughed LOUD and online shopped with mighty abandon. If you've ever been a recipient of one of Terry's gifts, you know what we mean. (What does one do with "Happy Birthday" themed toilet paper?) With bright red hair to match her fiery spirit, Terry was truly one of a kind... .and that is why we love her.

Everyone loves Terry; she was the litmus test. If someone didn't love Terry then there was clearly something VERY wrong with that person. Everyone feels like they have a special connection to Terry -and they do. That is Terry's gift. She could make you feel like you were the most special person in the world... and in that moment with Terry, you were. Terry listened without judgment and loved unconditionally. She was equal parts mother, therapist, and friend. She embraced everyone fully: the troubled teens she nurtured, her menagerie of pets and large extended family. Being related to Terry felt like you won the lottery. Every day, whether it was a text, a Facebook update, a tweet (her social media game was on point), or a phone-call, you felt lucky to receive her kind words of love.

And Terry never just liked something; she LOVED it. Whether it was her beloved animals, (she used to steal the neighbor's pets when she was a child) the Wizard of Oz, Pee Wee Herman (she had shrines) or sunflowers, she loved them. It is only appropriate that sunflowers were Terry's flowers, because she looked like a sunflower ready to bring sunshine to everyone in her garden.

Terry was the youngest of the Slotkin Sister trio. Her older sisters Barbara and Marilyn were her fierce protectors and partners in crime. (Ask them about the poor cousin they rolled down the stairs in a metal trashcan.) Barbara brought the wisdom, Marilyn brought the strength and Terry, well she was the wild card bringing the laughter. Hell hath no fury for anyone who messed with one of the sisters.

But no one benefited from Terry's radiant light more than her beloved husband Brian. Their marriage was truly one for the storybooks. They found each other a little later in life, but it didn't stop them from visiting theme parks (Terry - not a fan of the Harry Potter ride), baking cakes (with limited success), creating video collages of her family, and truly enjoying and loving life. The strength of their inimitable bond was present for all to admire. The reason that Terry was able to share her joy with the world was because Brian filled her heart with that same joy.

Many people say Terry was a child at heart, which explains why her step-kids Brandy and Billy, nephews Jeffrey and Greg, nieces Shira and Emily, and lifelong best-friend Hayes had a special place in Terry's gigantic heart. Terry was more than the title of "step-mom" or "Aunt;" in fact there will probably never be accurate words to describe the place that Terry has in their hearts. That's Terry's magic.

We know that this isn't the typical obituary but Terry was far (a flight to the moon far) from typical. Next time you see a sunflower, look closely and you will see Terry's joyful smile and feel the warmth of her generous spirit.

In lieu of flowers please make donations to the Make a Wish Foundation of Sarasota or Pulmonaryfibrosis.org

After the funeral service, the family will receive guests at their home from 7pm to 9pm for Shiva. The address is 13019 Prestwick Dr., Riverview, FL 33579.